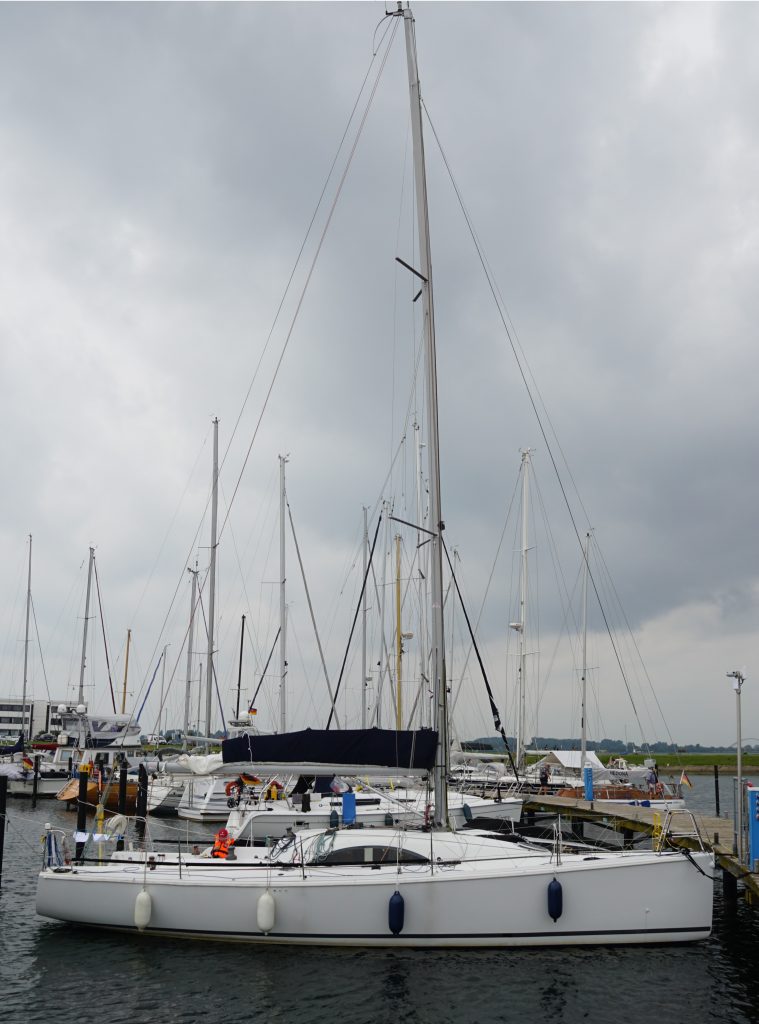 So, after quite some time the next entry in my blog: We got a new boat – an Archambault A35. In this blog post I will try to give people who are in the process of looking for a fast but family-suitable boat some background on my decision but also compare the A35 with the Django 7.70.

I was pretty much satisfied with the Django 7.70 but for two adults and now three children it started to feel too small. Given the average of boat sizes twenty years back or longer it is maybe quite spacious and would principally work with three children but somehow for us it was borderline – maybe we are already too spoiled.

Again, I (and my wife admittedly a bit less) wanted to have a boat that is faster than it is luxurious but still would be usable with a family. The following criteria were important for us:

The other candidates apart from the A35 I looked into were:

So, I ended up with the Archambault A35:

It fulfilled quite some of the criteria we had (more on that later) and maybe as a result of Archambault being bankrupt they are quite reasonably priced. As Archambault built roughly 140 A35 the market for used boats is also quite liquid – at least in France and Britain where this boat is kind of a bread-and-butter racing and training boat.

Up to now in this season I did not have too much time to use the boat for job, weather and family reasons. However, here come some first thoughts on the boat.

Disclaimer: Please always take my findings with a grain of salt – I try hard but I still have to learn a lot about sailing and sailboats.

In one sentence: This is a very fast, seaworthy, stiff and powerful boat. It behaves really nicely – even with only two persons on board it did not feel like necessarily reefing while going upwind until 5 Beaufort and even an occasional gust above that. The stability caused by the wide transom and the 44% ballast are also nice for the family: You simply take it a bit slower by reefing earlier and the boat sails more upright. My wife – who sometimes gets sea-sick – finds the boat much more comfortable in waves but we did not experience and heavier weather yet.

Up to now I did only use the asymmetric gennakers in lighter wind conditions and I did not even touch the symmetric spinnakers. I have to say that I am still a bit afraid of their size and the additional complexity of the spinnaker boom. But always when I went sailing this year the wind-conditions made me use the Code Zero that came with the boat quite a lot. This is really a weapon in light wind conditions.

I have the double-rudder version which is feeling really, really neutral – obviously this reduces the power consumption of the autopilot but it gives only little feedback if you trimmed the boat incorrectly. I was a bit afraid of handling the double-rudder version in the harbour but up to now that has not been a problem either. Quite often I dock the boat backwards and then it is not very affected by wind coming from the side.

I was not able to get the Django going quickly upwind on True-Wind-Angles smaller than 50° – that felt somehow like the optimal angle. With the A35 it feels the best angle (at least given my sailing skills) is around 45° or lower. This is obviously a huge difference it is really nice in sailing areas like the Baltic Sea where you just cannot follow the trade-winds but somehow have to go home at the end of your vacation.

The only down-side up to now is that as a result of the larger boat-size everything feels more complicated, more difficult and more sluggish than on the Django. But I guess that was to be expected from a boat being that much larger and heavier and I will get used to it … however, obviously still much better than on a Bavaria or anything comparable.

All in all I am very satisfied how the A35 sails.

The built quality feels quite solid in all concerned areas. However, my A35 was on land for almost two years and thus had quite a backlog of maintenance. But it was never raced too hard.

Despite the overall good quality of the boat there are some areas of annoyance that are maybe obvious to more experienced sailor but that I learned the more or less hard way:

The boat has an inner liner with hollow stringers in longitudinal and lateral direction that contribute to the overall stability of the boat. These stringers are connected to each other and are used for the cables of the boat. That they are connected means that if you get some water between the outer and inner hull somewhere (in my case I got some water in the boat from a damaged pipe for cooling water for the motor) you suddenly end up with water in a different place (like e.g. the cupboard under the navigation table). As another A35 owner advised I managed to get rid of the water in the stringers by using a suction pump usually used to change oil in cars and a tube but it was not that simple. Obviously, I am not the only one who had the problem of having water between hull and inner liner but coming from the Django that problem never occurred to me.

Another issue that did not occur to me was the water tightness of the keel-stepped mast: Up to now I did not find a proper method of preventing water from entering via the slot of the mast. As the mast has a plug of Spartite I also cannot simply get a silicone cover over this plug … if you have any good advice please let me know. Again, I and our boat class are by far not the only ones having this problem…

A well working autopilot is in my opinion one of the most important pre-conditions for hassle-free sailing with family. My boat came with a B&G H3000 system – which is still obviously a good system in general but most of the displays had some water ingress so that the displays were not working correctly. This seems to be a very common issue with the H3000 system. There are still improved replacement displays available here but only for an unacceptable high price.So I replaced the system with a combined B&G Vulcan and Triton setup – I will do another post on this later.I had the opportunity to do the upgrade together with Holger Schulz from Ostsee Nautik (http://www.ostseenautik.de) – which I can only recommend to the highest degree. Holger did all the complicated stuff, showed me some of his tricks and answered all my questions patiently. The components I got rid off will be available for sale shortly.

In terms of the interior (and thus the main reason for switching to a larger boat) I feel that we now have sufficient space – but only barely so:

On one had we have now much more living space than on the Django. Especially, it is now possible to prepare two little children simultaneously for the night or in the morning which was an annoying process before. Also the bathroom/technical area on the starboard side is much more accessible than on the Django.

However, the storage space is quite limited at the time being. This for sure can and will be corrected by cleverly using bags on the walls or making currently non-accessible space e.g. under the front bed accessible but it requires quite some thinking and modifications.

The interior is not so nice and friendly like on the Django but still acceptable.

As far as as the (from my point of view) luxurious changes like an electric boiler, fridge or an electric toilet are concerned: We will for now see and push these investments to the next season.

All in all I feel that my wife and children like the new boat much more than the Django as a result of having additional space.

My blog about sailing modern boats together with family…