I get more and more into 3D-printing things for my sailboat. The next thing I made is a collar for the mast – it is almost waterproof now.

You can download the respective files for Autodesk Fusion 360 here.

The material I used is Filamentum ASA in Traffic White – it is UV-stable and quite nice to print – with the following parameters:

The mast collar was printed on my Zortrax M200 3D printer.

During the autumn trips I found that the Vulcan 7 touch display does not work really well when it is wet from rain or waves and my fingers were cold.

So, I printed a 3D rain cover and a protector with my 3D printer which works absolutely fine.

The cover is split in two parts so that I could print it. The material is Filamentum ASA with the following parameters:

My daughter is now 18 months old and she can walk very well. Furthermore, she is curious and would not just like to stay under deck while sailing and climbs basically anywhere. So, what to do if you would like to have a save and comfortable place for her on deck where she can’t go over board?

What I came up with is this construction:

It is asymmetrically mounted in the cockpit in order to allow for easy access to the autopilot being mounted next to the entrance of the cabin and to the entrance itself.

As you can see it is also portable – so it can be either used under deck or be completely removed if you go racing with your friends: 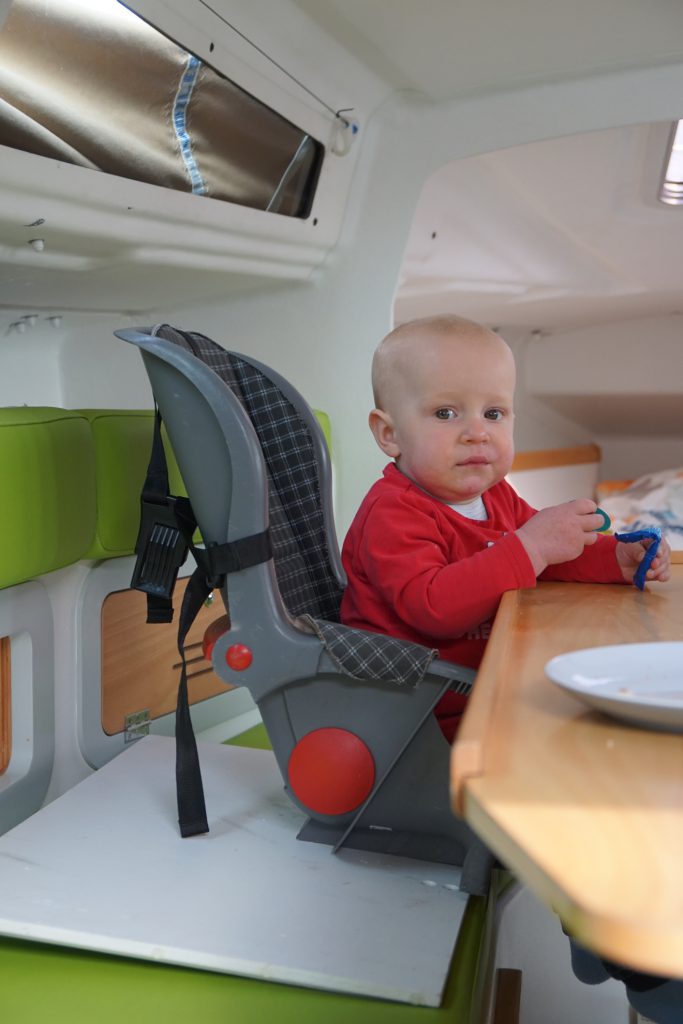 Please have a look at the attached gallery. The whole thing works really nice – however and obviously I do not take any guarantee for the safety of your children while using this setup.

Maybe you experienced this as well:

When you are reaching the main sails touches the spreaders and can get damaged. In order to prevent this – there are standard protectors but when you use them do yourself a favour: 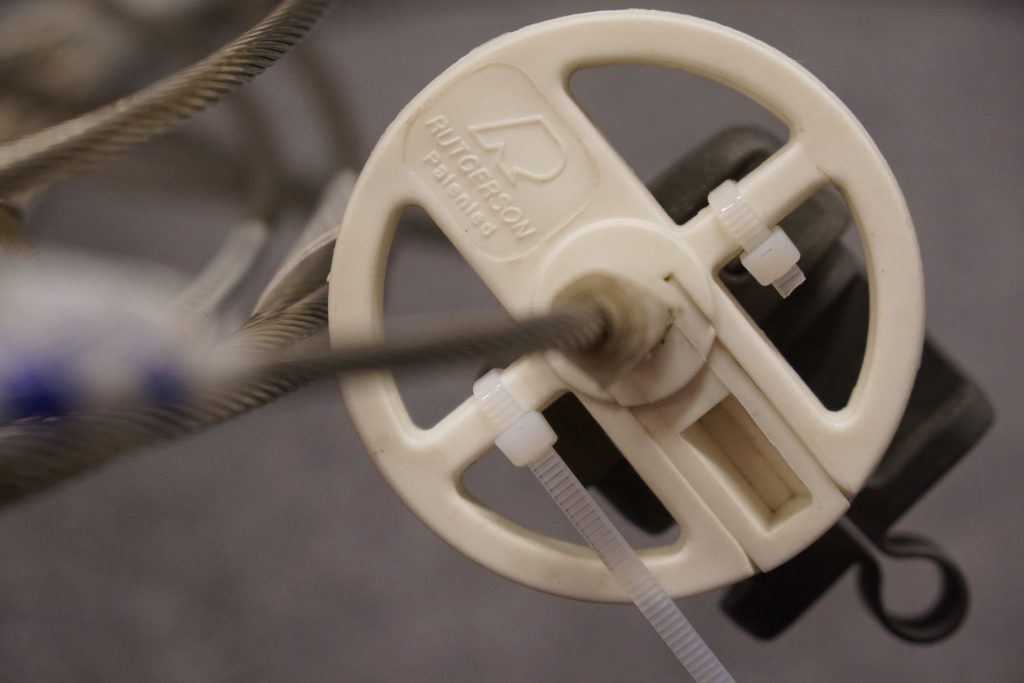 In order to mount the chart-plotter without irreversibly sawing wholes into the Seascape I built myself a casing out of plastic.

The casing is made of UV-resistant plastic and bent by using a hot air gun and a form made out of wood.

It is not exactly stylish like an Iphone but considering my manual skills quite okay.

And a little video from different angles showing the different modifications:

Please find the scheme how I supplied my Seascape 18 with electrical power.

Main goal was to provide the Seascape with power independently from a fixed power grid installation and to have enough battery storage to supply the attached devices with power during one sailing day.

Comments on some of the components I used:

When you move the traveller on the Django 7.70 the edges in the cockpit are damaged relatively easily (see damage in the red circle).

In Germany you can buy this nice self-adhesive, stainless-steel gelcoat protection under:

Additionally to the two Raymarine i70 multifunction-displays that came with my Django I wanted to install a chart plotter that would be accessible and visible from the cockpit.

I wanted to do the whole installation destruction-free – meaning I did not want to drill or saw any wholes into the boat structure.

Here is how I did it:

Some time ago I decided to equip my Seascape 18 „Plain Vanilla“ with a number of sensors, a chart plotter and a radio. Goals and reasons for this decision were basically:

Whoever has tried to connect different nautical instruments from different vendors for sure had to face some issues regarding incompatibilites regarding the different interface standars like NMEA 0183, NMEA 2000, Seatalk, Seatalk NG,….

I spent some considerable time on researching what kind of components would interface well while at the same time delivering on the goals mentioned above.

B&G Zeus Touch 7
Central piece of my whole setup. Has nice sailing-related functionalities, is completely configurable and can connect NMEA 0183 as well as NMEA 2000 messages.

Raymarine Racemaster T070 Compass
I went for the Raymarine Tacktick series because most of the components are connected via a Raymarine-proprietary Wifi-protocol (thus less cables) and are also solar powered (thus also less cables and also less battery capacity required).
The racemaster gives directions, has a nice race countdown and can display not only information about the heading but also other measurements. It „coordinate“ all other Tacktick instruments.

Raymarine Wind Transducer T120
Feeds wind information into the network (which is necessary to enable all the nice sailing-related features on the Racemaster and the B&G).

Raymarine Triducer T910 and Raymarine Hull Transmitter T121
Feed in information about the speed through the water, depth and temperature. The hull transmitter is needed in order to „translate“ the information from the Triducer to the Wifi-network.

Raymarine NMEA Transmitter T122
Translates all the wireless information into NMEA 0183 messages which then can be read by the B&G. Works like a charm…

Lowrance Link-8 radio
Can obviously be used as a radio with DSC-functionality (it receives GPS-information from the B&G) but also receives AIS information from ships in the vicinity and transfers those to the B&G where they are displayed on the screen.

I guess I was lucky but the whole setup did not cause one single problem regarding compatibility and has been working ever since I installed it.

Here you find a picture that illustrates the interconnections.

My blog about sailing modern boats together with family…